Everything you need to know about MCCI’s USB DataPump

The architecture of the MCCI USB DataPump® USB Device Stack is explained in the following sections:

Sample code showing how to use the MCCI USB DataPump to implement a loopback protocol for bulk or isochronous endpoints is part of the USB DataPump evaluation kit, available from MCCI.

All USB devices follow a standard structural architecture, outlined in chapter 9 of the USB core specification.

The exact structure of the device is represented to the host via the USB device descriptor and configuration descriptors. The host uses this information to load the appropriate device drivers and to determine how to route control messages to the appropriate object within the device.

An Engineering Change Notice (ECN) to the USB 2.0 specification further adds flexibility in defining multi-function devices. As before, each device contains one or more functions. Each function is in turn made up of one or more interfaces. Now, however, the device designer may indicate how interfaces are to be grouped into function using one or more Interface Association Descriptors (IAD). Operating systems use the information in the IAD to help them understand the mapping of interfaces to functions on multi-function devices and to load the appropriate driver for the function. Prior to this ECN, the operating system might need to be updated in order to be able to handle new kinds of multi-function devices. The IAD mechanism provides a generic, technology-neutral means of solving this problem. The designer must still put all the class-specific information in the class descriptors that are defined by the device classes for each specification, and must follow certain rules laid out by the ECN.

Control messages are always sent via the default pipe on endpoint zero. These messages are then routed to one of four different layers in the device:

Of these destinations, only the first three are commonly used.

In addition, provisions are made for devices to carry natural-language descriptive text, which the host system can present to the user even if the host system doesn’t recognize the device. This text can appear in many different languages, as chosen by the designer. Unfortunately, the text must be prepared in Unicode, in the byte order used by Intel systems, which can make it a little awkward to prepare. However, MCCI provides a tool that makes it easy to prepare these strings, even if the target compiler for the device doesn’t support UNICODE in Intel byte order.

Figure 1 is a schematic diagram showing many of these features.

The four endpoint types are: 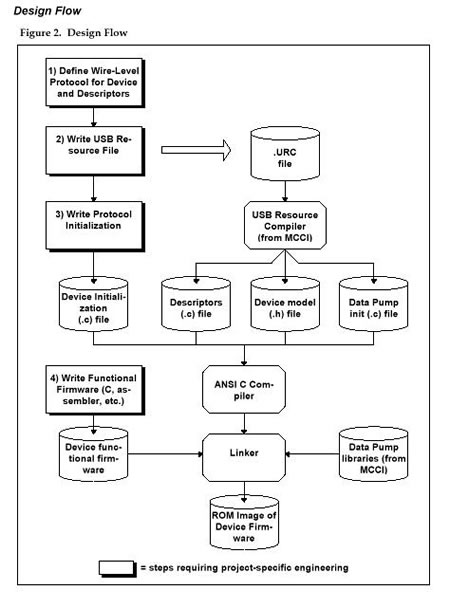 The MCCI USB DataPump was designed with a particular design process in mind.

Although the process has several steps, you do not need to become a USB expert in order to use the DataPump. Using the MCCI USB DataPump and the supplied loopback protocol, MCCI’s customers have demonstrated functionality on their prototype boards within a matter of days, with no prior USB experience.

The DataPump USB device stack models a given device as a tree.

For example, the port of the DataPump for the Synopsys DesignWare USB 2.0 device controller declares an USBPUMP_ENDPOINT_DWCHSOTG structure that represents a UENDPOINT, with additional, hardware-specific information appended to it. So a structure, representing an endpoint, will be viewed in two ways: as a UENDPOINT by the portable code and as a USBPUMP_ENDPOINT_DWCHSOTG by the Synopsys-specific code.

Figure 3 is a schematic of these data structures. 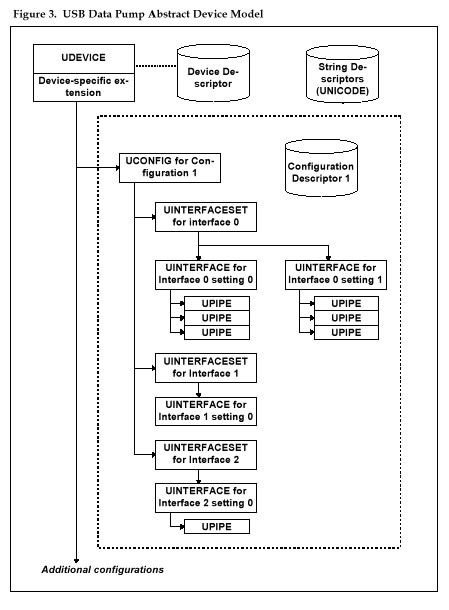 The USB DataPump API has two fundamental interfaces that are used by applications or protocol modules.

There are two general classes of USB events:

Both kinds of events are handled by the same basic mechanism.

As mentioned previously, the “chapter 9 commands” are those commands defined by the core USB specification as being required for any USB peripheral. However, chapter 9 compliance is not enough; you still have to define how to use USB to control and activate your device.

The core specification defines a general-purpose transport protocol. The device designer builds upon the general protocol to implement more specific functions. Because designing a protocol can be tricky, and in order to allow similar devices to share drivers, the USB Implementers Forum (USB-IF) has defined a number of standard protocols that can be used as the basis for your design. For example, modems often follow the Communication Device Class (CDC) specification as an additional protocol layer added on top of chapter 9.

For some devices there is no adequate protocol defined by USB-IF. In that case, the USB specification allows you to define a vendor-specific protocol. Although this means you must provide your own drivers, this gives you much more flexibility. It can even help you reduce the cost of your device.

For example, RS-232 ports are not supported very well by the CDC specification. MCCI has defined a vendor-specific protocol and protocol extensions to allow RS-232 to be handled either as an extension to the CDC spec (allowing drivers to be shared) or as a purely proprietary protocol (to reduce the cost of the device).

If you are implementing a custom protocol, the DataPump includes a “Vendor Specific Class” protocol module. This module takes care of all the details of interfacing to the DataPump, and exports a simple read/write/IOCTL API to be used by your application-specific code.

The following protocols are supported directly by the DataPump:

Protocols, whether abstract or concrete, are implemented as follows:

DataPump protocols are very modular and need not duplicate any of the chapter-9 functionality.

The DataPump is written entirely in ANSI C and has a layered implementation.

Application modules (e.g., the loopback test, the virtual serial port module, or the CDC modem module) are layered on top of the DataPump. This connection is inherently dynamic and reentrant, so multiple instances of a CDC interface can be supported just as easily as a single interface. This is important in USB 3G cell phone applications, as it allows easy implementation of multi-call support.

The USB DataPump is completely portable with respect to target-processor byte order (little-endian vs. big-endian).

Porting the MCCI USB DataPump to a New Platform

These adaptations normally take about one week of effort altogether, depending on the target environment and the quality of the C compiler, provided that the new platform uses a USB device already supported by MCCI. Because of the emphasis on high performance, writing a new chip driver is more difficult and normally takes about four weeks of effort.