NCM for LTE, MirrorLink and CarPlay

As LTE networks become ubiquitous for mobile and IoT data service, product designers are forced to optimize all aspects of the connection between the local equipment and the network. Although there are low-volume data applications in which the modem might be implemented as a full-speed USB device needing little more than MCCI’s CDC Ethernet USB class drivers, LTE radios deliver content at rates now approaching 1 Gbps.

By shortening data transit time from application to modem, designers can reduce radio-on time and substantially reduce system power. For this kind of throughput, full-speed devices and old data-transfer protocols are not optimal. Similarly, when implementing MirrorLink or Apple CarPlay to connect smart phones to cars, throughputs of 100 to 200 Mbps are needed in order to satisfy the users with quick response and smooth updates of the display.

For these kinds of devices, turn to MCCI for seamless, high-quality, high-throughput NCM functionality. MCCI was the primary contributor to and technical editor of the CDC NCM specification. Our implementations are the fastest in the industry! 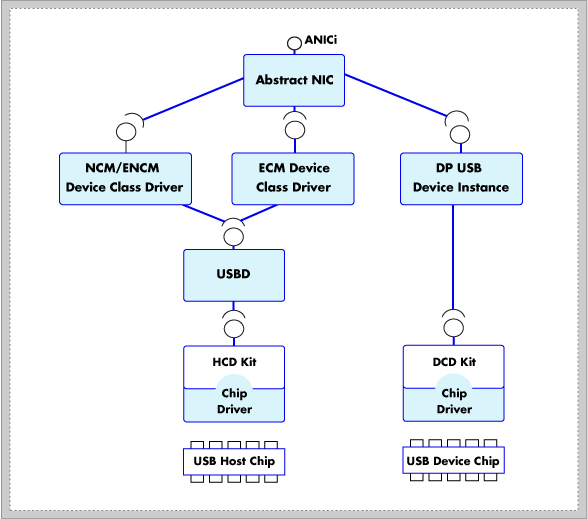 At the most basic level, modem-based products are throughput-restricted because the modem protocol CDC ACM (Abstract Control Model) uses PPP-encapsulated IP frames to communicate with the host PC. CDC NCM eliminates the overhead of CDC ACM and maximizes data flow to the handset.

Once the switch from a modem architecture to a network architecture is made, the problem of frequent interrupts must be addressed because CDC Ethernet and CDC ECM transfer only a single frame per USB transfer. Every time a USB transfer finishes, the processor must stop what it is doing and service the interrupt. This is very costly in terms of performance and battery life. CDC NCM includes many Ethernet frames within a single USB transfer, substantially reducing the interrupt burden.